Alfred Street Baptist Church didn’t cancel its first Sunday service – or the next one, or its last one – after receiving a bomb threat during its worship service on Saturday evening.

Alfred Street Pastor Howard-John Wesley, who has led the historic Old Town church for a decade, said the message the church sent by continuing on with its three Sunday services is clear.

“We need to let whoever this was know that, ‘No, you didn’t win and you’re not going to.’ No matter how much you threaten, we will still worship. If this building is destroyed, we will be somewhere else and doing what we are called to do,” Wesley said.

Wesley said the church was nearing the end of its 6 p.m. Saturday service shortly after 7 p.m. when a staff member informed him that the Alexandria Police Department had blocked off the area and recommended that members of the congregation remain seated. He was later informed that police were searching for unmanned packages outside of the church.

“[A staff member] came back in and said, ‘Police are asking you to shut your phones off’ and that’s when people knew it had to be bomb-related,” Wesley said. “We kept things very calm and sang songs and worship just continued. There was no panic, no chaos.”

Alexandria Police Department Spokeswoman Crystal Nosal said police received the bomb threat via phone call and responded to the scene at 7 p.m. The police didn’t find a bomb or anything suspicious at the scene, and cleared it at about 9 p.m. Nosal said police were still investigating the incident and no arrests have been made at this point.

Wesley said the crowd of between 700 to 800 people left the church through an exit designated by police without incident. He said Alexandria Police swept the building with dogs trained to detect explosives and returned with the dogs after each Sunday service.

“I can’t say enough about the Alexandria City Police and the ways in which they responded quickly, efficiently, gave us information on the spot, helped exit our members and get them out safely,” Wesley said.

Though the scene was cleared and the incident went as well as could be expected, the threat at Alfred Street Baptist comes at a time when incidents of violence against religious institutions are growing in number and escalating. 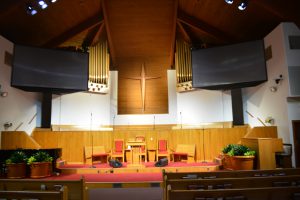 It comes less than two weeks after the fatal shootings at the Tree of Life Synagogue in Pittsburgh, Pennsylvania and three years after another deadly shooting rampage at Emanuel African Methodist Episcopal Church in June 2015 in Charleston, South Carolina. Both Tree of Life and Emanuel AME are, like Alfred Street, historic institutions with an expansive membership.

Alfred Street dates back to 1803, when members from another regional African American Baptist church separated to establish their own church in the city. The church was formally established in 1806 and the church has been at its current site since 1818, according to the church website.

Councilor John Chapman, who has attended Alfred Street Baptist since 1995, said the threat is a reflection of rhetoric from political leaders and an increase nationally in violence and threats of violence.

“I think we’re seeing just a wave of either violence or politically motivated harassment across the country and it’s unfortunate it’s struck home in Alexandria as well,” Chapman said. “I think we’ve seen an escalation over the last couple of years. We’ve seen KKK posters that have popped up in different places across our community. Now we have this. It’s unfortunate, but it’s kind of where our country is, what our country is dealing with and when you have political leadership that is spitting hateful rhetoric, this is what happens.”

“I condemn these cowardly and evil acts in the strongest possible terms. I have worshipped at Alfred Street many times, and I look forward to doing so many times in the future. Hate will lose, as it always does,” Fairfax said.

Wesley said, in the aftermath of the threat, he began to think about the recent acts of violence in conjunction with the history of bombings and violence against black churches during the Civil Rights Era.

“I think for me the thing that resonates the most is when now the Tree of Life Pittsburgh and Alfred Street are put together in the same sentence – that’s when it begins to dawn on me what really happened,” he said.

He said his main priority in the incident and its aftermath is protecting the congregation, but that he has felt the impact of it as well.

“Personally, I think I’ve been so busy that it hasn’t really weighed on me, but thinking about not being here for my kids – that’s when it becomes real,” Wesley said. “So, we’re talking through it, praying it through, addressing it.”

He said those who were impacted emotionally by the bomb threat are able to go to Alfred Street’s staff counselor. The church has always had extensive security, with Alexandria Police Department officers on scene during every service and an in-house security detail.

Wesley said, though he expected some hesitancy for members to attend the 7:30 a.m. service on Sunday, a crowd still came. They continued coming for the services at 9:30 a.m. and 11:30 a.m.

He said the way he and the congregation are looking to move forward, in light of violence across the country, is by denouncing hateful speech and actions and rising above.

“We have to address this rhetoric of hate and division, whether it comes from the White House or from your co-worker. Language has power and we must use language of love and healing, not division and hate,” Wesley said. “I think it’s up to people who are like-minded to rise above, to not yield. … For me, rising above it for me is going above and beyond with acts of love, to pray for him, to pray for our president, to pray for those who feel different, to pray for those at rallies who are being ignited with hatred, to be kind and loving and to be clear we’re not going to give in.”

This article was written and published by Alexa Epitropoulos | aepitropoulos@alextimes.com

The Alexandria NAACP is Revamping!